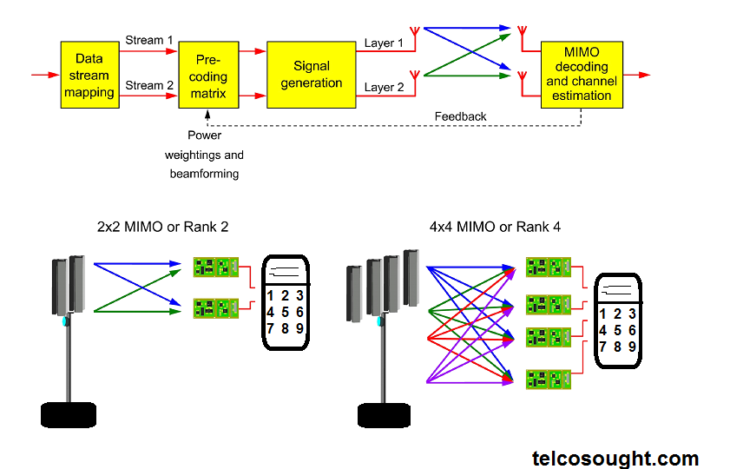 The method by the way that data streams are mapped to layers can affect the advantages provided by a particular MIMO implementation and the way in which it is specified this is an essential aspect of the design process. Pre-coding is also a method to enhance the MIMO system’s performance. Pre-coding can be adaptive, and as such will be based on a source of estimation of the channel. This can be calculated from the transmission or reception part of the connection.

It is fairly simple to install antennas onto the base station in a non-correlated way. For a two-way MIMO array, only a single cross-polar antenna could be employed. A 4×4 MIMO array will need two panels that have an appropriate separation. This is a challenge on a mobile. However, in the case of bases stations, two MIMO can be achieved by cross-polarization but it could cause some unintentional directivity of the antenna

The Benefits of MIMO:-  Advantages of MIMO 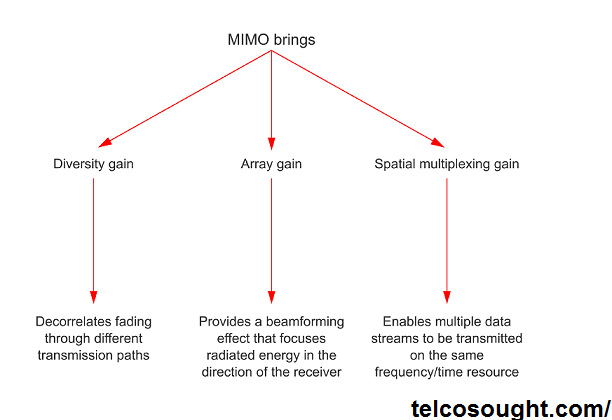 MIMO can be a complex technology, but it could provide huge benefits to systems capabilities. There are three primary ways that MIMO can improve the efficiency of systems. Any MIMO implementation could reap the benefits of these advantages or be set up to make use of only one or more of them. Ideally, a system must be designed with enough flexibility in MIMO implementation to permit the system administrator to select the best method for different conditions or system objectives.

The gain in diversity is derived from the use of multiple antennas at either the receiving and/or transmitting ends of the link radio. This leads to multiple transmission paths that have decor-related fade characteristics. This results in an improvement overall in the channel signal-to-noise ratio, which results in increased capacity and reliability of the channel.

The term “array gain” is the ability to form beams of a multi-antenna array. If the feedback is properly signaled from the receiver or data collected via a return link the array can be directed the radiated energy to the receiver in a controlled beam. This results in enhanced channel performance and higher throughput. 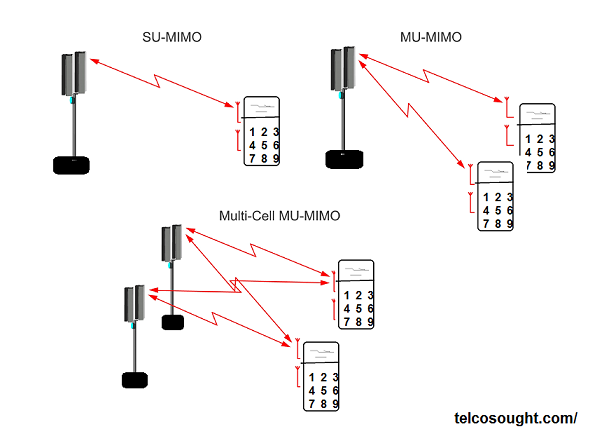 The most basic application of MIMO is often known as the SU-MIMO (Single-User MIMO).

The SU-MIMO idea can be expanded to include the MU-MIMO (Multi-User MIMO). In this case, the spatial multiplexing capabilities of MIMO have been utilized to multi-patch the link to multiple mobiles by using the same frequency and time resource. The order of the multiplexing available depends on the number of antennas (or rank) that are available at the end of the transmitter and receiver on the connection. For instance, the figure illustrates a 2×2 MIMO arrangement used for MIMO using two mobiles.

In this scenario the amount of data that each mobile could receive would be less than the rate offered to a single device that has a SU-MIMO setup, however, both phones are given the same frequency and time resource, and are still able to use it for array growth and diversity. This means that the capacity of cell phones is raised, however, the resource could be divided among a greater amount of users. The utilization in combination with more than one transmitter or receiving station this way is often called virtual MIMO.

Also, it is possible to use MU-MIMO in one direction using a single antenna on the mobiles. In this scenario, the array and diversity gains would be reduced, but the time and frequency resources are still able to be reused within the cell.

The MU-MIMO technology can be further developed to create multi-cell MU-MIMO. In this case, the stream of data is mapped to antenna resources of several base stations which offer a combined connection to multiple mobiles within multiple cells. The diagram is actually 4×4 MIMO however it is shared among two connections. Be aware that spatial diversity is likely to be significant in this scenario due to the geographic distance between the base station from the mobiles.