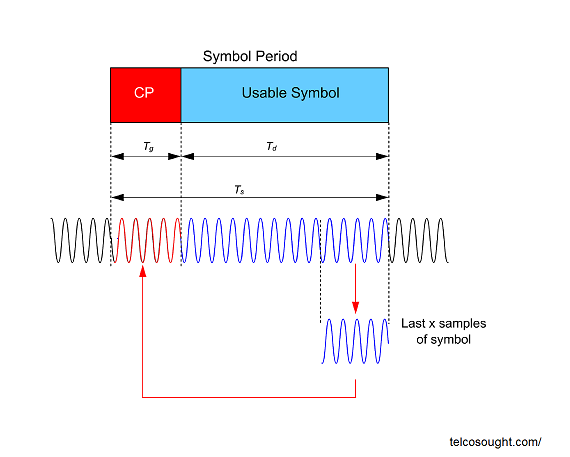 The OFDM cyclic prefix was created to counter the ISI (Inter Symbol Interference), effects of multipath, and other channel impulse reaction effects. Multipath can cause echoes of signals from the past that travel a longer distance than the primary signal and arrive later. learn LTE 4G Tutorial.

As long as the cyclic period of the prefix is not longer than the maximum delay spread, the effect of ISI can be eliminated or mask by it.

The cyclic prefix copies the copied samples, filling what would otherwise be an empty guard period. This means that every sample window between Ts and Td of equivalent duration will contain the full number of cycles for each subcarrier, maintaining orthogonality.

The cyclic prefix rate effectively lowers the bitrate relative to the total bandwidth required by a radio channel. This can have potentially serious consequences for bandwidth efficiency. The benefits of minimizing ISI tend to outweigh the negative effects. However, it is possible to achieve better performance if the relative length of the cyclic suffix and the useful symbol time can be adjusted within a fixed total symbol duration in accordance with current channel conditions.

Different functions are assigned to subcarriers drawn from the entire OFDM channel’s population. Many subcarriers will carry modulated user information signals. Each subcarrier will carry only one part of the parallel signal being transmitted over the multi-tone channel. Each data subcarrier’s data rate is determined by the combination of the modulation scheme used and the symbol rate.

Some OFDM variants, such as the WiMAX version, allow entire subcarriers to carry ‘pilot signals’. Pilot subcarriers are used to make channel quality and signal strength estimations and to allow for other control functions such as frequency calibration. Pilots transmit at a higher power level than data subcarriers, typically 2.5 dB more. This allows them to be easily acquired by receiving stations.

The same function is carried out in LTE systems and others, such as DVB (Digital Video Broadcasting), by “reference signals”. Reference signals, which are similar to pilots, allow a receiving station to recalibrate its receiver, make channel estimations, and instead of taking up an entire subcarrier, it is embedded in the stream data being carried on a normal subcarrier.

The ‘DC carrier’ is the subcarrier at the center of each OFDM channel. It is the one with a 0Hz offset from the channel’s center frequency.