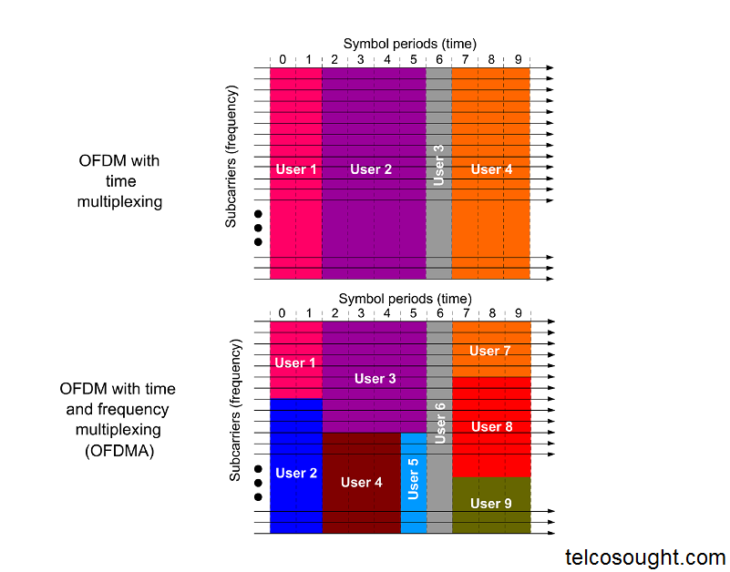 The most straightforward way to get multiple access within the OFDM device is to employ an aspect of time-multiplexing that is incorporated into the OFDM radio bearer. This is clearly illustrated in the upper portion in the figure. Each user gets the full bandwidth of the channel as well as each data subcarrier is exclusively used for a specific number of symbol intervals.

The highest efficiency is possible when an adaptive time-allocation system is used in a way that users who have greater bit rate requirements are assigned a higher percentage of their time. However, in this system, the most resource allocation is just one OFDM symbol. Even using dynamic time allocation, this arrangement could be inefficient if there is a high need for several lower bit-rate connections, such as when several voice circuits are in use. Take the case of an OFDM system running at 10 MHz bandwidth with an FFT with 512 points and 16QAM. In the absence of reference and null subcarriers, a system could be able to transfer on 1600 bits within a single OFDM symbol time. This might seem like a tiny resource, but the delay requirements should also be considered. In a real-time application like voice, it is important to limit round-trip delay. To satisfy the requirement for delay for a voice-based service, resources will be allocated, for instance at least once every 20 milliseconds. This could mean the case of a minimum bandwidth allocation for one user at a rate of at least 80kbit/s (or 120 kbit/s when 64QAM is being used). While allowing for errors protection overhead, this resource could significantly decrease the efficiency of the system and its capacity to gain the benefits of advanced techniques such as discontinuous transmission or channel adaption.

Higher efficiency in the allocation of resources is possible through sub-channelization. This is a method of dividing resources by time and frequency. So, a user can be allocated a portion of the subcarriers within the network, which is seen in the lower portion of this diagram. This allows much greater allocation of resources and thus higher efficiency. OFDM systems that enable this type of system are often referred to in the form of OFDMA (Orthogonal Frequency Division Multiple Access) systems. 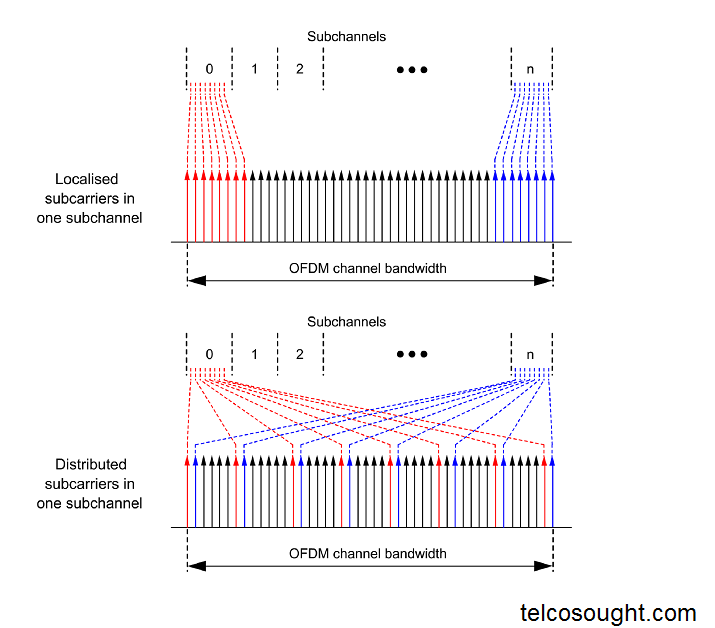 Subchannelization in practice is typically achieved through the systematic division of all subcarriers available into a group of channels. The smaller the set of subcarriers that are part of each channel, the more precise the resource allocation.

In some systems, the subchannel definition could be fixed, and the allocation of resources will be based on the determination of the subchannels to some or all symbol times. However, the system’s performance could be improved if the subchannel structure is changed to make it more adjustable.

The most significant feature of subchannel structure is the method the subcarriers grouped together are allocated within the bandwidth of the channel. There are two main options that can be used: they could be distributed or localized.

The top of the diagram depicts the sub-channelization structure where all the subcarriers of a channel are localized. Because all the subcarriers in one subchannel are alike in frequency, there is no or little frequency diversification gain. The value of this approach is the high frequency of propagation within each subcarrier. This allows for better estimation of channel characteristics, and hence adaption, to be made. This particular approach provides the most efficient performance when efficient techniques like MIMO (Multiple Input Multiple Output) antenna systems are employed.

The lower portion of the diagram illustrates an organization for sub channelization where the subcarriers in a subchannel are spread across the channel’s bandwidth. This strategy has the major benefit that it increases frequency diversity on the subchannel. 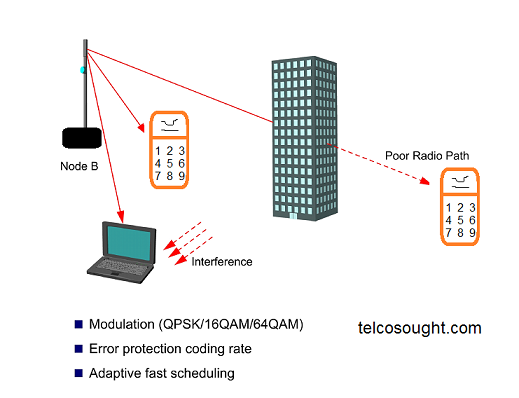 The quality of radio links is affected by a variety of factors, such as interference, fading as well as time dispersion. Radio channels from terrestrial mobile that are typically thought to be non-line-of-site are often very weak. This is why the majority of terrestrial cellular radio systems are built with robust modulation strategies as well as large overheads to protect against errors.

But a closer examination of real-world conditions on the channel will reveal that they are highly different in very small time intervals, and most of the time, every channel will exhibit excellent performance. Therefore, the most common approach is to engineer the channel to tackle the most extreme case, which is only a tiny period of time.

It is obvious that if the channel can be adjusted sufficiently to be able to monitor changing conditions on the channel, the performance of the channel would be substantially enhanced. This is the basis of channel adaption. channel adaptation can be a standard technique used by many broadband radio systems, and generally involves adapting to the scheme of modulation, as well as an error-protection overhead that is applied. Adaptive scheduling is also extremely efficient, allowing cells to make the best use of the number of channels that are allocated to various mobiles, and each will have a different frequency.