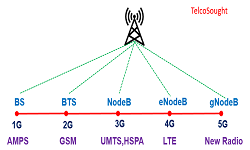 Telecommunication generation has evolved from Wired System to Wireless System, 1G to 5G and GSM to New Radio. When we move from one “G” to  another “G”, the name of technology is getting changed like for 2G we had GSM, 4G we had LTE and now with 5G we have New Radio (NR), similarly the name of base station also changes  and listed below.

5G base station use a split architecture where gNB is split into CU and DU (centralized deployment of gNB) so we got gNB-DU and gNB-CU. Further split for control and user plane creates two more functions gNB-CUCP and gNB-CUUP.