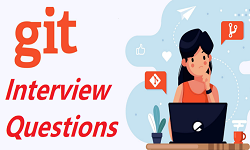 GIT is a distributed version control system and source code management (SCM) system. In this post we will capture most asked git interview questions and best possible answers.

Answer: git is a distributed version control system and source code management (SCM) system with an emphasis to handle small and large projects with speed and efficiency.

Q2) What is the command you can use to write a commit message?

Answer: The command that is used to write a commit message is “git commit –a”. The –a on the command line instructs git to commit the new content of all tracked files that have been modified. You can use “git add” before git commit –a if new files need to be committed for the first time.

3) What is the difference between GIT and SVN?

Answer: The difference between GIT and SVN is

Q4) What is a repository in GIT?

Answer: A repository contains a directory named. git, where git keeps all of its metadata for the repository. The content of the. git directory is private to git.

Q5) What are the advantages of using GIT?

Q7) What language is used in GIT?

Answer: GIT is fast, and ‘C’ language makes this possible by reducing the overhead of runtimes associated with higher languages.

Q8) Why GIT better than Subversion?

Answer: GIT is an open-source version control system; it will allow you to run ‘versions’ of a project, which show the changes that were made to the code overtime also it allows you keep the backtrack if necessary and undo those changes. Multiple developers can check out, and upload changes and each change can then be attributed to a specific developer.

Answer: Before completing the commits, it can be formatted and reviewed in an intermediate area known as ‘Staging Area’ or ‘Index’.

Answer: GIT stash takes the current state of the working directory and index and puts in on the stack for later and gives you back a clean working directory. So, in case if you are in the middle of something and need to jump over to the other job, and at the same time you don’t want to lose your current edits then you can use GIT stash.

Answer: When you are done with the stashed item or want to remove it from the list, run the git ‘stash drop’ command. It will remove the last added stash item by default, and it can also remove a specific item if you include as an argument.

Q12) How will you know in GIT if a branch has been already merged into master?

Q13) What is the function of git clone?

Answer: The git clone command creates a copy of an existing Git repository. To get the copy of a central repository, ‘cloning’ is the most common way used by programmers.

Answer: The ‘git config’ command is a convenient way to set configuration options for your Git installation. Behavior of a repository, user info, preferences etc. can be defined through this command.

Q15) How can you bring a new feature in the main branch?

Answer: To bring a new feature in the main branch, you can use a command “git merge” or “git pull command”.

Q16) What is ‘head’ in git and how many heads can be created in a repository?

Answer: A ‘head’ is simply a reference to a commit object. In every repository, there is a default head referred as “Master”. A repository can contain any number of heads.

Q17) How can you create a repository in Git?

Answer: In Git, to create a repository, create a directory for the project if it does not exist, and then run command “git init”. By running this command. git directory will be created in the project directory, the directory does not need to be empty.

Q18) What does commit object contain?

Q19) What is the purpose of branching in GIT?

Answer: The purpose of branching in GIT is that you can create your own branch and jump between those branches. It will allow you to go to your previous work keeping your recent work intact.

Q20) What is the common branching pattern in GIT?

Answer: The common way of creating branch in GIT is to maintain one as “Main” branch and create another branch to implement new features. This pattern is particularly useful when there are multiple developers working on a single project.

Answer: A ‘conflict’ arises when the commit that has to be merged has some change in one place, and the current commit also has a change at the same place. Git will not be able to predict which change should take precedence.

Q22) How can conflict in git resolved?

Answer: To resolve the conflict in git, edit the files to fix the conflicting changes and then add the resolved files by running “git add” after that to commit the repaired merge, run “git commit”. Git remembers that you are in the middle of a merger, so it sets the parents of the commit correctly.

Q23) To delete a branch what is the command that is used?

Q24) What is another option for merging in git?

Answer: “Rebasing” is an alternative to merging in git.

Answer: The syntax used for rebase is “git rebase [new-commit] “

Q26) What is the difference between ‘git remote’ and ‘git clone’?

Answer: ‘Git remote add’ just creates an entry in your git config that specifies a name for a particular URL. While, ‘git clone’ creates a new git repository by copying and existing one located at the URI.

Q27) What is GIT version control?

Q28) Mention some of the best graphical GIT client for LINUX?

Answer: Some of the best GIT client for LINUX is

Answer: ‘Subgit’ is a tool for a smooth, stress-free SVN to Git migration. Subgit is a solution for a company -wide migration from SVN to Git that is: a) It is much better than git-svn b) No requirement to change the infrastructure that is already placed c) Allows to use all git and all sub-version features d) Provides genuine stress –free migration experience.

Answer: As ‘Git Status’ shows you the difference between the working directory and the index, it is helpful in understanding a git more comprehensively.

Q32) What is the difference between the ‘git diff ’and ‘git status’?

Answer: ‘Git diff’ is similar to ‘git statuses, but it shows the differences between various commits and also between the working directory and index.

Q33) What is the function of ‘git checkout’ in git?

Answer: A ‘git checkout’ command is used to update directories or specific files in your working tree with those from another branch without merging it in the whole branch.

Answer: To remove the file from the staging area and also off your disk ‘git rm’ is used.

Q35) What is the function of ‘git stash apply’?

Answer: When you want to continue working where you have left your work, ‘git stash apply’ command is used to bring back the saved changes onto the working directory.

Answer: To find specific commits in your project history- by author, date, content or history ‘git log’ is used.

Answer: ‘git add’ adds file changes in your existing directory to your index.

Answer: The function of ‘Git Reset’ is to reset your index as well as the working directory to the state of your last commit.

Answer: ‘git Is-tree’ represents a tree object including the mode and the name of each item and the SHA-1 value of the blob or the tree.

Answer: ‘Git Insta web’ automatically directs a web browser and runs webserver with an interface into your local repository.

Answer: This directory consists of Shell scripts which are activated after running the corresponding Git commands. For example, git will try to execute the post-commit script after you run a commit.

Q42) Explain what is commit message?

Answer: Commit message is a feature of git which appears when you commit a change. Git provides you a text editor where you can enter the modifications made in commits.

Q43) How can you fix a broken commit?

Answer: To fix any broken commit, you will use the command “git commit—amend”. By running this command, you can fix the broken commit message in the editor.

Q44) Why is it advisable to create an additional commit rather than amending an existing commit?

Answer: There are couple of reason

Answer: To co-ordinate with the distributed development and developers’ team, especially when you are working on a project from multiple computers ‘Bare Repository’ is used. A bare repository comprises of a version history of your code.

Q47) What is the difference between Git and GitHub?

Answer: Git is fast. Speed and performance have been a primary design goal of the Git from the start. With Git, nearly all operations are performed locally, giving it a huge speed advantage on centralized systems that constantly have to communicate with a server somewhere. Git was built to work on the Linux kernel, meaning that it has had to effectively handle large repositories from day one. Git is written in C, reducing the overhead of runtimes associated with higher-level languages.

Q49) In Git how do you revert a commit that has already been pushed and made public?

Answer: There can be two answers to this question and make sure that you include both because any of the below options can be used depending on the situation: Remove or fix the bad file in a new commit and push it to the remote repository. This is the most natural way to fix an error. Once you have made necessary changes to the file, commit it to the remote repository for that I will use git commit -m “commit message”. Create a new commit that undoes all changes that were made in the bad commit.to do this I will use a command git revert

Q50) What is the difference between git pull and git fetch?

Q51) How do you find a list of files that has changed in a particular commit?

Q52) How do you setup a script to run every time a repository receives new commits through push?